This story first appeared in HuffPost

SAWM member and journalist Smita Sharma reported from Dera Baba Nanak as the inauguration of  Kartarpur corridor turned out to be a happy, fulfilling and heart warming experience for the Jathedars from India. The historic trip to Darbar Sahib opened up a new dimension of India-Pakistan realation.

Dera Baba Nanak, PUNJAB: As a historic dream and long-pending request of the Sikh community finally came true on Saturday, Dera Baba Nanak in Gurdaspur, on the Indian side of Kartarpur Corridor, witnessed a sea of people. Men, women, old and young, and children walked kilometres to witness history as Prime Ministers Narendra Modi and Imran Khan inaugurated the Kartarpur corridor in separate ceremonies.

Once the security clampdown was eased after PM Modi’s departure, Zero Point saw huge crowds pour in, raising religious slogans and singing hymns. Riding horses and jeeps, they all merged into a single colour of faith and harmony as they neared the Kartarpur Darbar Sahib Gurudwara 4 kilometres away.

The official indian delegation that made the first historic journey from the Passenger Terminal building and Integrated Check Post in Dera Baba Nanak to Darbar Sahib, across the zero point in Narowal in Pakistan, comprised 562 jathedars or devotees, including former prime minister Manmohan Singh and Punjab Chief Minister Amarinder Singh. Most eyes were on former cricketer Navjot Singh Sidhu, as he embraced Imran Khan and addressed the pilgrims at Darbar Sahib.

On their return, the jathedars were beaming with happiness and satisfaction.

“The experience was very good. Both governments took steps for meeting of hearts, which is welcome. Large populations in both countries want that the two sides talk peace,” said Iqbal Singh Gandhi, a sevadar from Ujjain in Madhya Pradesh, who found the Pakistani arrangements to welcome the jatha impressive.

“We were accorded love, warmth and respect. Both the Prime Ministers gave messages of love. Imran Khan spoke about breaking down boundaries and barriers. Gurudwara Darbar Sahib and its corridors are beautiful,” said Gurnam Singh Jassal, smiling proudly.

The delegation members were happy that this time, unlike during the ground-breaking ceremony last year, no controversial Khalistan supporters were spotted in public at the shrine.

While the Indian government has raised concerns that the Pakistani army and ISI will try and leverage the corridor to radicalise innocent pilgrims and spread anti-India Khalistani propaganda, jathedars that this reporter spoke to seemed unfazed about the narrative of fear.

“The followers of Guru Nanak Dev will never do anything wrong. The ones who are mischievous, we cannot say about. But simply putting up some anti-India posters or hoisting Khalistani flags do not mean anything,” argued Avatar Singh from Lakhimpur Kheri In UP, who was volunteering at a langar (community kitchen) in Dera Baba Nanak.

“Pakistan’s designs have not been good since independence. It can try to fuel separatist sentiments. But the Sikh community in India will never allow this to happen,”emphasised Iqbal Gandhi. 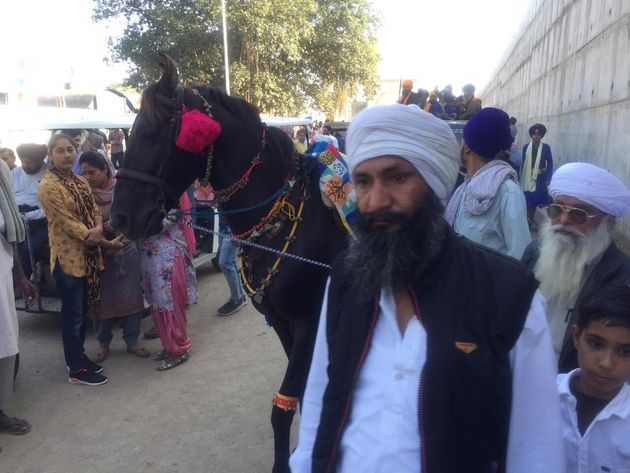 Riding horses and jeeps, the pilgrims merged into a single colour of faith and harmony as they neared the Kartarpur Darbar Sahib Gurudwara 4 kilometres away.

The pilgrims expressed hopes that the new corridor would lead to improved relations between the two Punjabs and open up channels of communication and dialogue between New Delhi and Islamabad.

“We believe that this is the blessing of Guru Nanak Dev. The India-Pakistan bus that plies stopped, both sides are talking about nuclear wars, someone was citing this corridor as ISI conspiracy. Despite all this tension the atmosphere today was peaceful and warm and both the PMs came and inaugurated it.I am sure one day all our conflicts will end,” said Prem Singh Chandumajra, Shiromani Akali Dal MP from Anantpur.

But thousands of people camping at Dera Baba Nanak in community tents are hoping they will have the opportunity to undertake the devout leg of the journey soon. Many of them, from poorer sections, complained that the $20 fees (which has been waived by the Pakistan government for two days0 and passport identification requirement should be done away with. But all of them agreed that the corridor was a fulfilment of their prayers and wishes.

The new worry of depleting diplomatic capital
Reclaiming the Republic! Does J&K figure in that imagination of India?
Sharad Pawar interview: ‘Public does expect alternative to Modi. Has anyone provided that? It’s Oppn’s fault…’
What ails India’s premier liberal arts university?
Sri Lanka gets its first president with military credentials
Shifting sands in the Kingdom

Modi-Xi’s dialogues by the sea: Managing a difficult relationship

All the hypes about Modi-Xi meeting died out soon after the meeting is over. The meeting held in Mammalapuram was all about the place and much […]