This story first appeared in www.aljazeera.com

In the hypermasculine Hindutva project, when young women are Muslim protestors against CAA- a direct tool of Hindutva-police use violence against them. Like in Jamia. When the young women are assertive & negate the Hindutva narrative of Indian women, police watch as bystanders while they are subjected to violence. Like in the case of Gargi college. Journalist and SAWM India member Neha Dixit writes.

New Delhi, India – Swati Singh describes how excited she was to attend her first college festival in the Indian capital, New Delhi.

On February 6, the last day of the three-day festival, as students were preparing for a concert, hundreds of men barged into the college campus and sexually harassed and abused female students.

Singh says she cannot forget the horror she went through at Gargi college, an all women’s college affiliated to Delhi University.

“I was looking forward to the fest. It means a lot to women like me who come from smaller cities and have never seen such big concert,” says 18-year-old Singh, who hails from the central Indian city of Indore.

Students accuse the police and security guards of doing little as the men molested women at the college, which is located in the affluent south Delhi area of Siri Fort.

“They were drunk men who groped us, pinched us in the crowd. One of them even threw money on my friend in a demeaning way. We couldn’t even move,” recalls Samra Ahmed, another student.

Students could not make calls for help as phone jammers were installed at the nearby Siri Fort auditorium.

Singh says when she approached a police constable outside the college gate, he said, “Don’t you come to the fest to meet boys?”

“Police think women attend a music concert for this?” she wonders.

Several videos of the festival have surfaced that appear to show the police standing by and watching men scaling the walls to enter the college campus.

Samvedna, another student, says a stalker followed her to the metro station on her way home after the festival. When she complained to the police, she says she was told: “Look at the clothes you are wearing. Is this how Indian girls should dress? Should I call up your parents?”

Singh says she was disappointed with the reaction of Promila Kumar, the college head. “She told us that if you feel unsafe in a college fest, don’t attend. Even a woman’s college is not safe for us?”

The students staged a three-day strike demanding Kumar’s resignation and an investigation into the incident.

Al Jazeera reached out to Kumar but she declined to comment on the issue.

Singh says her parents, who had only reluctantly agreed to allow her to move to Delhi to pursue her higher education, are now insisting she returns to Indore immediately. “They say I can join a college in Indore. It’s a punishment for police not doing their job?”

The police arrested 10 people in connection with the incident but they were all released on bail on the same day.

Police have instead found fault with college authorities. “The college was at fault for not making appropriate arrangements,” Atul Thakur, deputy commissioner of police for South Delhi, told Al Jazeera.

When asked why the police did not press charges against the accused, Thakur said: “We are investigating. We still don’t have evidence for assault or molestation.”

Its handling of the Gargi college incident has not been the only criticism of Delhi police recently.

On Sunday, video footage – said to have been taken on December 15 last year – was released that appeared to show police beating students inside the library of Jamia Millia Islamia (JMI) University, also located in New Delhi.

In early January, police were accused of turning a blind eye to attacks on students protesting against a fee hike by masked men linked to the governing party inside Jawaharlal Nehru University (JNU) in New Delhi. More than a month after the incident, no arrests have been made. 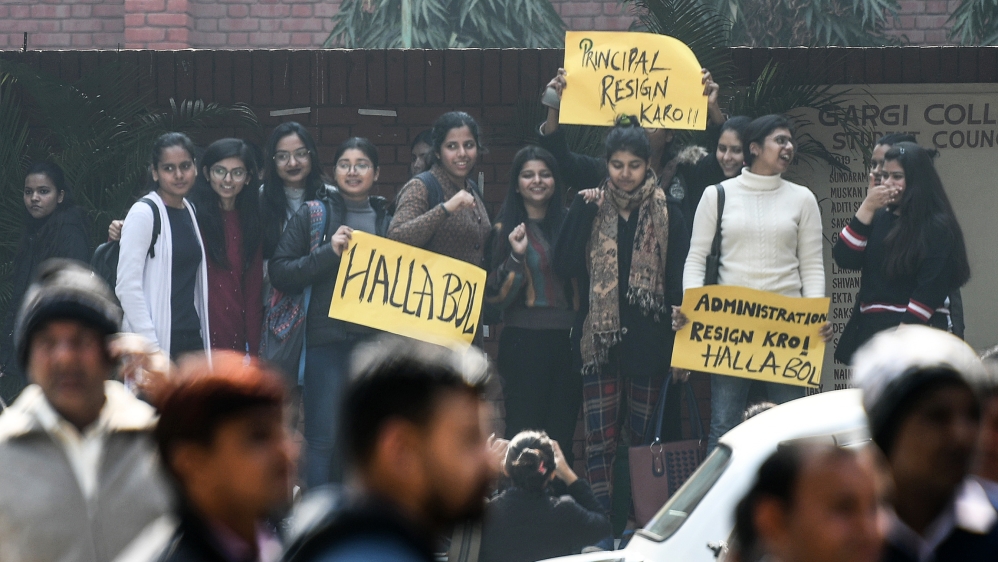 Four days after the Gargi College incident, police personnel baton-charged hundreds of students from JMI who were trying to march from the university campus to Parliament in protest against a new citizenship law.

In the last two months, videos of young women braving police assault to save male protesters have become synonymous with the anti-CAA protests.

Many female students at JMI have accused the police of using excessive force against them during the February 10 march.

Raziya, a JMI student, says she was beaten on her private parts with a flash rod. “They said, ‘These women shield terrorists with their burqa. Take them in a corner and teach them a lesson’,” said Raziya, who is undergoing treatment for a rib fracture.

“Why did they target our hijab. What is wrong with it?” she told Al Jazeera.

Iqra, an 18-year-old student at JMI, says she was also beaten by a male constable with a stick on her private parts and her legs. “It was a preplanned attack specifically targeting young women who have been proactive in these protests,” she said.

Chanda Yadav, another Jamia student, said she was taunted by the police: “You protect men because you think we will not hit you?” She says a male policeman hit her with a flash rod on her thigh.

But the police have denied the allegations, saying “no force was used by the police.”

“All allegations against us are untrue.The entire protest has been video graphed by us,” RP Meena, south east deputy commissioner of police, told Al Jazeera.

“In fact, some of our men were manhandled and they received injuries during the scuffle.”

The recent incidents have raised questions about the safety of women in public spaces, particularly in Delhi which has seen a high number of sexual assaults against women.

“The idea of safety is anyway restrictive,” said Shilpa Phadke, a sociologist and co-author of Why Loiter, a book on attitudes towards women in public spaces.

“Here, safety for women is also conditional on women being ‘respectable’ and ticking the right boxes. Attending a protest or a college fest, both do not fit into any box,” she told Al Jazeera.

Rebecca John, a lawyer at the Supreme Court of India, says the police’s behaviour at Gargi college is a repetition of how they usually behave with victims of sexual violence.

“They don’t see anything wrong with assault and groping. They dismiss such victims, call them liars. They try to look away. It is the same narrative here,” John told Al Jazeera.

“Young women are representing all intersections of the society – Dalit, Muslims, tribals, everyone. This has shaken the government. That is why the police has been instructed to break their determination, weaken them and send them home, show their place in a patriarchal world.”

Twitter
Neha Dixit is an independent journalist based in New Delhi, India. She covers politics, gender and Social Justice in South Asia. She has worked with multiple mediums and reported for Al Jazeera, Smithsonian, Caravan, Outlook and others. She has won multiple awards including Kurt Schork Award in International Journalism 2014, Lorenzo Natali Prize for Journalism from the European Commission, 2011, Chameli Devi Jain Award for Outstanding Woman Journalist 2016 among others. She is currently working on her first nonfiction book on women workforce in India. She is a contributor to the UNESCO Casebook of Investigative Journalism 2011, Zubaan anthology on Sexual violence in South Asia and First Hand: Graphic Non-Fiction in India.