20/05/2021, by Rozina Islam, in Article of the Day, Recent Articles, Safeguarding Media Freedoms

In a letter sent to the secretary of health services division of the health and family welfare ministry, they claimed that a section of the candidates had paid Tk 1.5-2 million (15-20 lakh) each to pass the written exams

Rozina Islam, a senior reporter of Prothom Alo, has been reporting on various irregularities, corruption and mismanagement in the health sector. These reports of Rozina Islam have been widely discussed. The reports have exposed many incidents of corruption.

In the light of these reports, the government has also taken action against many involved in corruption, irregularities and mismanagement in the Ministry of Health.

This is one of the reports of Rozina Islam, published on 12 April 2021, on corruption in the health sector and the health ministry:

Two members of a recruitment committee of Directorate General of Health Services (DGHS) have complained of a large-scale bribery during a recruitment.

In a letter sent to the secretary of health services division of the health and family welfare ministry, they claimed that a section of the candidates had paid Tk 1.5-2 million (15-20 lakh) each to pass the written exams.

A deputy secretary of another ministry offered a member of the recruitment board bribe and promotion to pass the candidates in the viva voce.

In the letter, a member of the recruitment committee alleged that Tk 10 million (1 crore) was offered in cash, and more money and promotion later.

The DGHS took the initiative for this recruitment to fill the shortage of technical manpower in the government hospitals during the coronavirus pandemic.

The DGHS issued a circular in this regard on 29 June.

A total of 2,251 candidates passed the exam held in December, which is 5 per cent of the total candidates. However, 80 to 85 per cent of them got high scores in the written exam which created a doubt. Later, the viva voce was taken very strictly.

The DGHS has dropped two of the members of the recruitment committee on the allegations of discrepancies in the recruitment exam. The DGHS is saying that it is not possible to cancel the whole exam. For this, they have made it mandatory to get at least 10 out of 20 in the viva voce. The officials concerned said that competent candidates were not available in the viva voce against all the posts mentioned in the circular. They are planning to recruit around 800 candidates for this reason.

Sheikh Md Hasan Imam, director (administration) of DGHS and also the head of the recruitment committee said, “I have informed the secretary of health services division and the director general of the DGHS about the allegations by the members of the committee. I have proof.”

He further said, “When more than one candidate gets 79 out of 80 in the exam, it is a matter of concern.”

DGHS’ deputy director AFM Akhter Hossain is one of the two officials who had been removed from the committee on the allegations of discrepancies. Md Abul Hashem Sheikh was appointed in his place on 29 February. He was appointed to Mugda General Hospital previously. He was made the member secretary of the recruitment committee.

Speaking to Prothom Alo, Akhter Hossain said that he does not know why he has been removed from the committee.

Abul Hashem, the newly appointed deputy director (administration) of DGHS wrote a letter to the secretary of health services division on 8 March alleging that he had been offered a bribe. Abdul Mannan was the health secretary at the time. In that letter, Hashem wrote that deputy secretary (planning) of the disaster management and relief ministry, Sreenibash Debnath met him on 1 March and offered him a bribe.

Hashem further wrote, “He (Sreenibash) said, ‘I will pay you Tk 10 million (1 crore), where will we meet? I asked, ‘Why will you pay me such a large amount of money?’

Sreenibash said, “You have to help pass the candidates in the viva voce in accordance with the list we provide. They have done well in the written exam.”

He also mentioned in the letter that deputy secretary Sreenibash also offered him a promotion during that meeting. Hashem further wrote that Sreeninbash’s phone rang while talking to him. Sreeninbash gave the mobile to Hashem and said the assistant personal secretary (APS) of the health minister wants to talk to him (Hashem). A man named Arifur talked to Hashem over the phone and asked him to act according to Sreenibash.

Hashem wrote to the secretary of the health services division, “I told Sreenibash Debnath that I am unable to do any work in return for a bribe. And then he (Sreenibash) said this Tk 10 million is not the all, you will get more after the appointment, just think about it.”

According to Hashem, Sohel was a night guard before, who was illegally promoted to the post of MLSS. Hashem also urged to take actions against this syndicate of recruitment business to make the DGHS free of corruption.

When asked about the reason for sending the letter, Hashem told Prothom Alo, “I think there has been a large-scale discrepancy in this recruitment. So I have filed a complaint in writing to the health ministry. I have verbally informed the health secretary (former) about this. They have thanked me.”

When asked about the offer for a bribe, deputy secretary Sreenibash Debnath told Prothom Alo over the mobile phone on Sunday, “I do not know anything about this. I haven’t been to the DGHS in 2-4 years.

However, Sreenibash admitted that he knows Arifur. Both of them were officials of economic cadre. Arifur was once the APS of the health minister.

It is noted that a man named Arifur Rahman Sheikh once worked as the APS of the health minister. He was removed from the post in January 2020 on the allegations of multiple discrepancies.

At present, Arifur Rahman Sheikh is working as the senior assistant chief of the planning division. Regarding the allegation made by Hashem, he claimed that he never said such a word to anybody.

Allegations of another member of the recruitment committee

Deputy secretary and a member of the recruitment committee, Sharmin Akter Jahan sent a letter to the secretary of health services division on 16 February regarding the irregularities in the written exam of recruiting technologist and technician of DGHS.

She mentioned that as per the proposal of Dipankar Biswas, a member of the recruitment committee and deputy secretary of the public administration ministry, and the decision of the committee, the department of applied mathematics of Dhaka University was given the responsibility to evaluate the papers of the written exam.

Sharmin Akter further wrote that many of the candidates obtained a good score in the exam despite a tough questionnaire. In some papers, there was even no scope of cutting numbers which was quite unnatural.

She further mentioned in the letter that when the viva voce started, it was seen that those who got a lot of marks were not able to answer any question in the viva voce. Those who got marks from 40 to 59 have done well in the viva voce. She claimed that she had learned from reliable sources that Tk 1.5 to 2 million (15 to 20 lakh) had been taken from each of the candidates.

Sharmin Akter wrote, “This is a very serious matter. I am urging to investigate the incident and take legal actions against the officials concerned.”

Concerned sources said after being informed about this, the health secretary acknowledged the matter to the public administration ministry. After that, Dipankar Bishwas was removed from the recruitment committee.

However, Dipankar claimed to Prothom Alo that he did not play any part in this. He only ensured that everything was being done according to the rules.

Speaking to Prothom Alo, Sharmin Akter Jahan told Prothom Alo, “We want an investigation to be conducted against each of the accused officials.”

We got the link

Prothom Alo spoke to six such candidates who got high marks in the written exam but failed in viva voce.

Seeking anonymity they claimed that many of them got a link containing the answers on the internet before the written exam. They memorised the answers and took part in the exam. One of the candidates said, “These sorts of recruitments cannot be done without money.”

Urge for a thorough investigation

Health minister Zahid Maleque told Prothom Alo on Sunday that he has not been informed about the irregularities as yet. The government hospitals are facing shortage of manpower to provide services to the patients in the current situation of coronavirus infection in the country. For this reason, the health ministry took the initiative of a large recruitment on an emergency basis. Earlier in 2020, some 203 technicians were recruited in one phase without any recruitment exam. The DGHS accomplished that recruitment process at the behest of the president.

Iftekharuzzaman, executive director of Transparency International Bangladesh (TIB), told Prothom Alo that such irregularities are regular in recruitment in the country but do not come to light. The government officials, who complained this time, are praiseworthy.

He said that now this matter should be investigated in detail and punitive measures should be taken against the people involved. If that is not the case, then it must be understood that the corrupt have a collusion with the higher level of authorities.

Presently working as a senior reporter in the Bangladesh’s most widely circulated daily, the Prothom Alo since 2010. Her Specialisation and area of reporting in areas of Environment, energy, Economy and Education. She has keen interest in Politics, Govt. Affairs, Women’s Issues & The Liberation War.

Coronalympics: ‘The Delta variant is outcompeting all other previous versions’
The importance of being Amit Shah
Modi government needs to take a leaf from Vajpayee model
Bangladesh arrests journalist known for unearthing graft
A new order: When the world emerges from the pandemic, we’ll wake up to a new multilateral order
Kashmir: A volcano waiting to explode 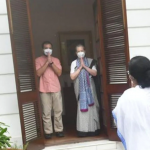