International TV channels have run visuals of waiting ambulances and patients outside hospitals, and cremations to underline India’s lack of preparedness.

In a virtual meeting with Indian ambassadors and high commissioners posted across the world, External Affairs Minister S Jaishankar on Thursday conveyed the message that the “one-sided” narrative in international media — that Prime Minister Narendra Modi and his government had failed the country by their “incompetent” handling of the second Covid-19 wave — must be countered.

The meeting came in the wake of strong editorials, commentary and reports in leading international newspapers such as the New York Times, Guardian, Le Monde, and Straits Times, and on TV channels, blaming the Modi government for ignoring warning signs, holding an extended election in West Bengal, and for not cancelling the Kumbh Mela.

International TV channels have run visuals of waiting ambulances and patients outside hospitals, and cremations in Delhi and elsewhere, to underline India’s lack of preparedness.

The official “context” for Thursday’s meeting was India’s efforts to mobilise resources, including oxygen container, concentrators, ventilators, drugs and vaccines, from countries that have offered help as the government struggles with the surge of cases, according to officials present in the meeting.

Officials present said two big themes were discussed. One was about efforts being made to procure all the material that India needs to overcome the surge. The envoys had several questions on how to send this, to destinations in India where such material should be sent, customs formalities, and related matters of logistics.

Taking control of the international media narrative was the other predominant theme. On this, participants said the message from Jaishankar was not to get overpowered by the “negative” media reports but to take charge and project the government’s side of the story.

Accordingly, the participants were told that the ferocity of the second surge was something no public health expert in the world had predicted, and that health infrastructure even in the most advanced countries had crumbled in the first wave last year, so this was not a disaster that was uniquely Indian.

The envoys were told that oxygen shortage was not due to a shortfall in production but due to restricted geographies of production, entailing transport across vast distances. The participants were also told to disseminate that there could be no connection between the elections, campaign rallies and the spike in numbers.

Jaishankar presented the argument that the numbers were highest in Maharashtra and Delhi, two states that did not go to the polls.

He did not touch upon the subject of Kumbh Mela, which has been been described in every international report as a “super spreader” event.

Although the participating diplomats had questions, no one asked about the consequences of holding the Kumbh. Nor were there any questions about the messaging from crowded election rallies addressed by the Prime Minister and Home Minister Amit Shah, in violation of social distancing norms, or any of the institutional failures pointed out by the international media.

Jaishankar also did not touch upon Vaccine Maitri, under which India shipped 66 million vaccines to other nations. None of the participants asked about this either.

Among suggestions made by envoys was that there was no need to counter every media criticism with a rebuttal of the kind written by the deputy high commissioner to Australia in response to ‘The Australian’ report headlined “Modi Leads India out of lockdown…and into Covid apocalypse”.

Beijing does not respect ‘One Country, Two Systems’: Hong Kong lawmaker
Why PM Modi and Gen Bajwa mean business with India-Pakistan peace talks. Nothing else matters
As the Gujarat Govt Downplays COVID-19 Crisis, People Suffer in Silence
If Biden ignores Afghanistan-Pakistan, ISI will get a long rope. India must play bigger role
Lockdown, Paatal Lok & Migrant Workers Tell Us Why Villages Exist
How Mamata’s Trinamool Broke The Glass Ceiling For Women In Politics 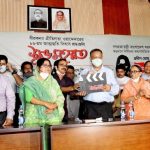