The Supreme Court of India has given out the much awaited verdict in Ram mandir-Babri Masjid issue. There are mixed reactions  across the country. Senior journalist and SAWM member Radhika Ramaseshan delves deep into the history of the Ram mandir movement and how that led to this much controversial verdict.

Almost everyone who played a pivotal road in the Ram Mandir movement, 27 years on, finds themselves rendered redundant in the eyes of the ruling dispensation.

Among the myriad paradoxes dotting the political landscape of Ayodhya, perhaps the most striking one is that of the Vishwa Hindu Parishad (VHP) — the RSS’ militant arm — that nurtured, fast-tracked and sustained a “movement” for the construction of a “bhavya” (magnificent) Ram temple on the mythical birthplace of Rama. The Vishwa Hindu Parishad (VHP) spearheaded one of the most successful campaigns in independent India, which assumed the size and shape of a warlike operation, culminating in the demolition of the Babri mosque, until the project was seized upon by the BJP which harvested rich political dividends from Ram. As the BJP soared to undreamt-of heights, the VHP faded out, almost in inverse proportion, pinned on the hopes that a legal verdict on the disputed land in Ayodhya will give it a fresh lease on life.

The VHP’s only living link to the memory and legacy of its patriarch, Ashok Singhal, is an eponymous foundation that is ironically located at Gurugram — not Ayodhya — which was second home to Singhal, a resident of Allahabad. Singhal’s mug — in the Sangh’s black cap, his forehead heavily smeared with sandalwood paste and a tilak, which embodies his lifelong commitment to the RSS and an embrace of political Hindutva — looms over the website. The only representatives from the Sangh and the VHP in the foundation are the former’s second-in-command, Suresh ‘Bhaiyya’ Joshi and Champat Rai, the VHP’s vice-president.

The construction of the Ram temple tops the foundation’s charter, a throwback to the power that Singhal commanded in the late 1980s and ’90s until LK Advani emerged as the preeminent protagonist of Ayodhya. Singhal died in 2015 and Advani turned 92 on November 8. One left without seeing a closure to the dispute while Advani — singed, hurt and sidelined by the “parivar” for praising Muhammad Ali Jinnah on a visit to Karachi — might live off sepia tinged (not saffron) memories because he’s out of the current BJP order.

Another supreme oddity in the Ayodhya saga is that it fell on a “mahant” — Yogi Adityanath — to preside over the administration of the state and the epicentre of a potential political seism as the Uttar Pradesh chief minister. Adityanath’s political “guru”, Mahant Avaidyanath, was the Hindu clergy’s face of the temple agitation. His monastery at Gorakhpur was the RSSVHP’s war room to draw up the launch the blueprint that ended in the first assault on the Babri mosque in 1990 and the final decimation in 1992. In a sense, Adityanath, who was involved in the developments as a young protégé of Avaidyanath, is the only living player in a vast troupe that shaped contemporary history in its own way — but with far-reaching consequences — and then dimmed and disappeared from the spotlight.

Most of the characters died, while those who are around have become expendable, although they probably hope that the arc lights might turn on them again on Saturday. So, who are they? 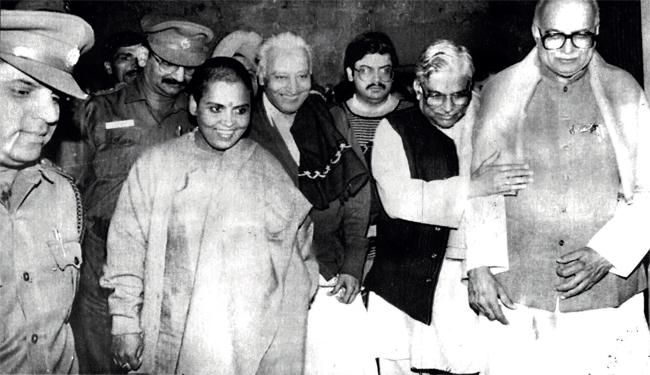 Consigned to the BJP’s “marg darshak mandal”, which some in the party uncharitably call a ‘pensioners’ home’, Advani is usually remembered by the present-day brass, on November 8, his birthday. The BJP evolved a norm to keep those who turned 75 out of active politics. Although he was given a Lok Sabha ticket in 2014 from Gandhinagar, which he won, he was not considered for a place in the Cabinet. If and when the BJP’s history is written objectively, Ayodhya and Advani should justifiably get equal space because if he had not got on to the Ram chariot that traversed the country and ignited the imagination of large sections of Hindus, the Congress would have been in a happy place forever.

He never had Advani’s stature and appeal, although he aspired to stand on a lofty pedestal. The one memory that’s forever etched in minds, is of Joshi beaming when the Babri mosque came down, with Uma Bharati perched on his shoulders. In 2017, a special CBI court charged him and Advani with criminal conspiracy in the 1992 demolition. In 2014, he too was put out to pasture, although he won the seat from Kanpur. He was not given a ticket in 2019. 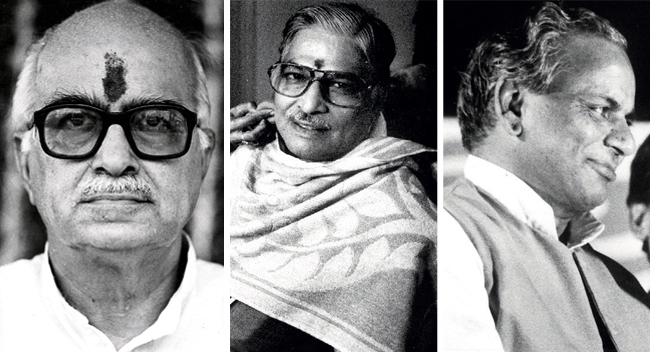 He was the BJP’s first UP chief minister, who, in his heart of hearts, did not want the mosque to go, because he knew his government would go with it. The “Hindu hriday ka samrat” moniker, often used for Narendra Modi, was coined for Singh, who nearly became the third angle of a triangle, the two other parts of which were Atal Bihari Vajpayee and Advani. Singh never quite made it there eventually. He was the Rajasthan governor in Modi’s first government and is nowhere now. His son is an MP, while a grandson is a minister in the Adityanath government.

She got a kick from being called a “sexy sanyasin” and outspokenness proved to be her downfall. Uma could never reconcile her twin personas as a Hindutva votary and a leader of the Lodh-Rajputs, the backward caste to which she belonged. The dilemma turned out to be a bane in a shortlived stint as the Madhya Pradesh chief minister. Advani indulged Uma to the extent he could, but she was a handful and he briefly suspended her from the BJP when he headed the party. She had no such luck with Modi. In his first term, he inducted her as Ganga Rejuvenation minister. Uma did not contest the 2019 election. She was in the news recently for speaking out against the induction of the infamous Gopal Kanda, an independent MLA, in the BJP’s Haryana government. She probably realised she had nothing to lose. 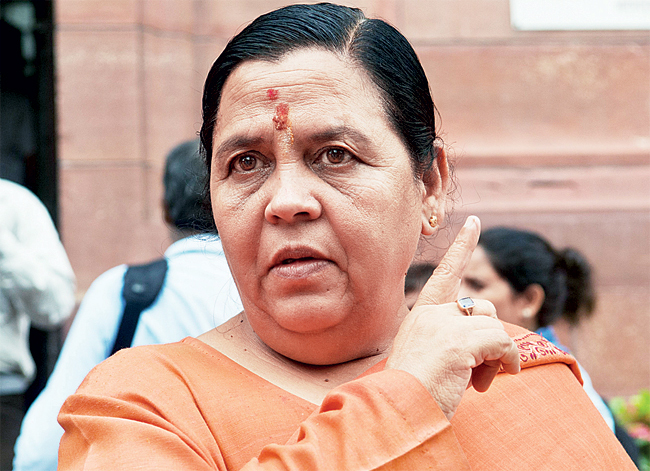 The former Faizabad-Ayodhya MP was Singhal’s favourite because he was an agent provocateur who could stoke the crowds in A political strategist par excellence, he headed Advani’s cabal of strategists for a long time. Vajpayee never took to him and Govindacharya was eased out of the BJP when Vajpayee was the PM. He played the swadeshi economics card for a while, but that got him nowhere once the BJP embraced reforms.

A political strategist par excellence, he headed Advani’s cabal of strategists for a long time. Vajpayee never took to him and Govindacharya was eased out of the BJP when Vajpayee was the PM. He played the swadeshi economics card for a while, but that got him nowhere once the BJP embraced reforms. 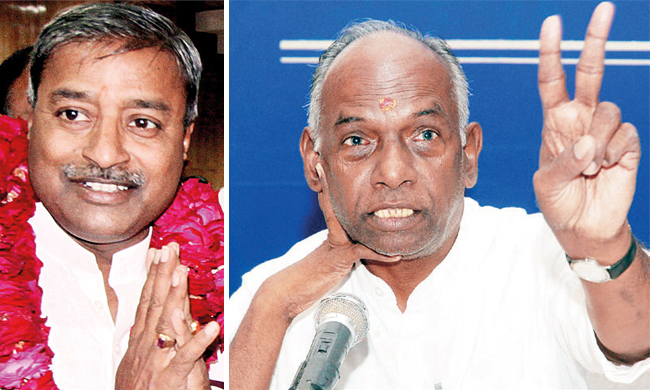 An alias for infamy. Thrice a BJP MP from various UP constituencies, he was discovered by Singhal, who admired his capacity to mobilise crowds as well as resources. Chinmayananda was appointed as the convenor of the Ram Janmabhoomi Mukti Sangharsh Samiti, created to take the movement to the streets. He has been in jail in Shahjahanpur after he was convicted for the rape of a law college student. He is considered to be a “guru bhai” of the UP chief minister, although they are separated by 25 years. Adityanath tried to bail out his soul brother but failed against public outcry.

He’s the head of Ramjanmabhoomi Nyas, the VHPsponsored trust, which was set up to build the Ram temple. He is the custodian of Mani Ram ki Chavani, Ayodhya’s largest temple, which has a pillar engraved with the entire Bhagwad Gita. Unlike his combustible predecessor, Mahant Ramchander Das Parmahans, his articulations are more nuanced and he gave an impression that it was essential to bring the Islamic clergy on board the temple, to the VHP’s dislike.

She competed with Uma Bharati in coining and chanting inflammatory slogans. She receded from the VHP’s radar with time and now runs a state-of-the-art gym and therapy centre in East Delhi and a martial arts school for women in Vrindavan.

His distinguishing sartorial mark was the white toga-like drape that he wore with his dreadlocks. Dharmendra was an integral part of the VHP’s steering committee. In 2008, a Rajasthan court sentenced him to a year’s imprisonment for a hate speech delivered at a religious congregation. Despite his pronounced anti-Muslim record, his son Somendra Sharma and daughter-in-law Archana are important members of the Rajasthan Congress. Dharmendra campaigns for them in elections, despite the fact that, in other forums, he traduces the Gandhis. 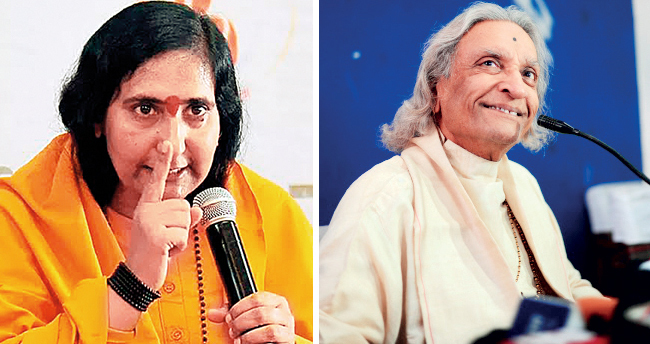 Once the heartland’s Tweedledee and Tweedledum, Mulayam was UP chief minister and Lalu his Bihar counterpart when Advani’s rath trundled through the countryside. Mulayam desperately looked to arrest Advani on home ground, but the-then PM VP Singh, who had issues with Mulayam, ensured that Lalu stole the limelight for the act in Bihar. Mulayam and Lalu had created captive minority vote banks for their respective parties. They are in the twilight of their political careers. 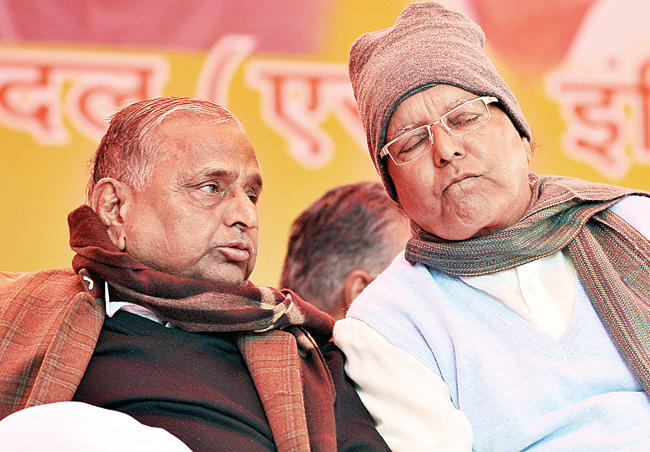